Football is as tied to Thanksgiving in America as turkey and family political disputes. If we aren’t watching it on TV, you can probably find most red-blooded Americans in their backyards taking part in their own watered down versions of the game.

While most outlets are doing drafts for their best dinner lineups, we here at Game On Wisconsin decided to go a different route. I, along with some of our other writers, have drafted are best Turkey Bowl lineups with some of your favorite (or not-so-favorite) Green Bay Packers.

Here’s the parameters we set up for the draft:

Now reheat those leftovers, pull up a chair and enjoy the 2021 Game On Wisconsin Turkey Bowl rosters.

My strategy going in was to find not necessarily the most talented players overall, but the ones who I think have the skills to excel in the rough and tumble world of Turkey Bowl football.

QB: Lynn Dickey – Obviously, the field for non-HOF Packers quarterbacks starts to get a little thin after Majkowski went off the board. Dickey is still a guy who can chuck the ball around; he held the record for passing yards in a game until Flynn’s Snow Bowl game in 2012. It doesn’t speak highly of his professional career, but I think his talent translates well to the backyard game.

RB: Eddie Lacy – When do most Thanksgiving football games take place? After you eat. Everyone’s bellies are full of mashed potatoes, they’re moving a half-step slower and they aren’t as ready to lay the lumber. I want a guy who can naturally handle playing in this state better than anyone else on the field. Lacy is going to run through a mother-turkey’s face while he grabs another biscuit crossing the endzone.

WR: Andre Rison – Thanksgiving is about family. More specifically, it’s about competing with family, settling disputes and establishing who’s better than who. The Turkey Bowl football field is a prime arena for that, so I want someone who’s not only going to win but rub it everyone’s face while he does it. Give me someone in Packers history that fits that bill better than Rison?

OL: Larry McCarren – This might be the deepest area of the draft here, so this might come as a surprise. I could’ve gone with sexier name, someone with more accolades behind their name. But I’m not drafting an NFL team here. I’m drafting for a knockdown, drag out backyard mud fest. I want grit. I want dirty.

I want this guy. 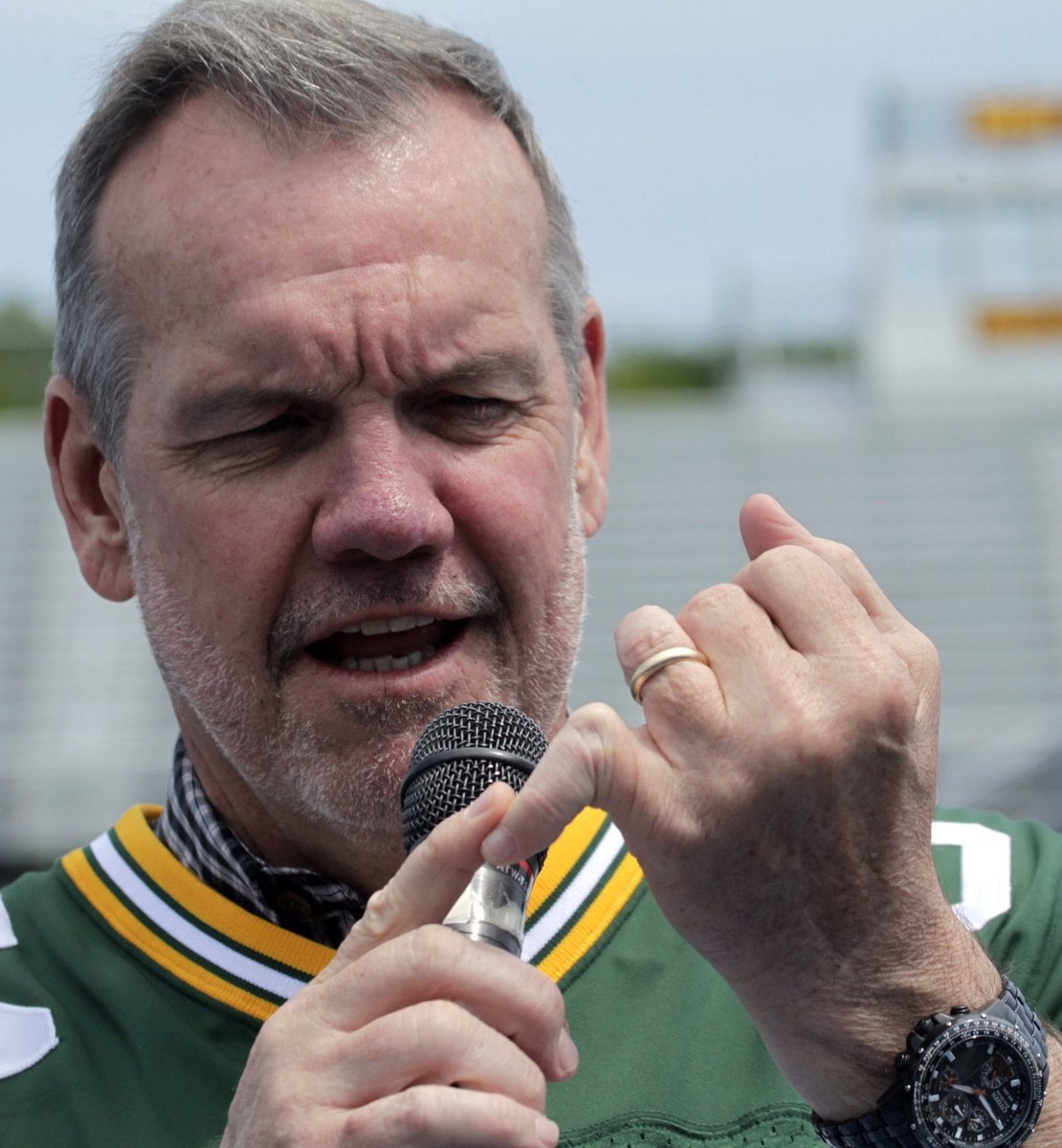 McCarren is giving you the forearm to the gut because he wants to prove it was you who ate the last piece of cornbread.

Flex: Leroy Butler – I feel confident in saying I not only have the best defensive player among any of the teams, but maybe the best two-way player in Leroy Butler. Not only can this guy cover anyone on the field and knock their block off, Butler is a threat offensively. And with Rison taking the top of the defense, Butler will be able to feast on the field as much as we would off it.

Given the two-way, wide-open nature of backyard football, the goal was to pick the most athletic team. After all, these guys are going to have to play both ways.

QB: Tobin Rote – He’s maybe not the most noteworthy quarterback in team history,  but Rote was a true dual-threat signal caller in his prime. Once described as “the quarterback who runs like a fullback,” Rote led all QBs in rushing yards four times in his seven seasons in Green Bay, while also pacing the NFL in passing yards twice and passing TDs once.

RB: John Brockington – One of the most imposing backs in franchise history, “Big John” Brockington churned out 3,276 yards over his first three seasons, earning Pro Bowl honors in each season and Rookie of the Year accolades in 1971. Not only did Brockington have the power, but backfield coach Red Cochran believed he was faster than Jim Taylor.

WR: Sterling Sharpe – Speaking of physical gifts, Sharpe was described by Ron Wolf as “a perfect football player” with his rare combination of size, speed, strong hands, and willingness to take hits. Despite concerted efforts from opposing defenses to neutralize him, Sharpe still averaged 85 receptions, 1162 yards, and 9 touchdowns across seven seasons.

OL: Gale Gillingham – “It was like kissing the front end of a train” was how Pro Football Hall of Famer Henry Jordan described playing against Gillingham. Strong, fast, and nasty, “Gillie” was one of a select few linemen defenders feared. “He was a beast,” Brockington said of his long-time teammate. “He pounded those weights. He was something else. Physical and fast. He was bigger. Mean. Put somebody ordinary over (Gillingham) and the guy had no chance. Gillie was going to pound him to death.”

Flex: Fred Carr – Another forgotten star from the down years of the ’70s, Carr had the size of a linebacker and the speed of a defensive back. “In practice, he would go out and play corner and cover receivers all over,” said former personnel director Pat Peppler. “He was all over the field.” In fact, upon being drafted in 1968, Carr had been considered for defensive end, safety, and tight end before being tabbed as a linebacker. Carr never missed a game in 10 seasons, while also being named to three Pro Bowls.

Growing up, and even as adults, we have all engaged in some form or fashion of a Thanksgiving backyard football game. So, this year, instead of getting my out-of-shape self-outside tossing around a pigskin, I took part in the Game On Wisconsin’s pick ’em draft of former Packers, non-hall of fame players to lead me to victory.

So, let’s take a look at my team of five former greats to lead the way:

QB: Randy Wright – I get it. Nothing flashy here, but let’s be fair – Wright only played one entire season for the Packers, throwing for over 3200 yards and 17 touchdowns. For that era, that’s not too shabby. Wright doesn’t need to be a superstar on my team; he’s surrounded by talent and makes enough throws to carry us to victory.

RB: Ahman Green – Ahman is arguably my favorite Packer, maybe ever. “Batman” was a monster on the field, being able to not only run defenders over or make them miss, but he was also able to catch the ball out of the backfield. Wright has his right-hand man in Green and uses him as a security outlet when needed while pounding the rock.

WR: Donald Driver- “Quickie” is one of the Packers’ all-time greats. What team doesn’t need a Driver-type of guy? The Packers’ all-time leading receiver in catches makes every single catch in the backyard. He’s tough, agile, and hard to tackle, making him an easy pick for a backyard brawl.

OL: Fred Thurston – Look, this isn’t a secret to anyone who knows football, but any Lombardi era players basically played backyard football every day. The rules were non-existent, and the toughness required made this an easy selection for my offensive lineman. I need a hard-nosed, willing to do anything type of guy, especially in a backyard football mash-up. Thurston is a perfect selection for my team, as “toughness” is our motto.

Flex: Jordy Nelson – Now this is getting too easy, adding serious threat and the sure hands of Jordy Nelson only make this squad even better. Jordy can beat a defender in many ways, especially in the backyard playing alongside Driver and Ahman Green. Jordy makes all the tough catches, helping secure a victory for the squad!

Our recipe is rather simple: Pound the ball and make the easy throws to two Packer all-time greats. Wright doesn’t need to carry this team, Green is our focal point while using Thurston to set the tone early and often!

I feel very strongly that I have assembled a fivesome that would win just about any backyard football game, including games against the other squads assembled by my Game On Wisconsin colleagues.

QB: Don Majkowski – When we’re talking backyard football, we’re looking at a lot of run and gun, plays drawn up as you go sort of offense. In all of Packers history outside of Brett Favre, there’s nobody better suited to quarterbacking that style of football than Don Majkowski. Majik is capable of running around, buying time, hitting guys on the run and scrambling when needed.

RB: Edgar Bennett – Backyard football doesn’t see a lot of running plays, so any running back I drafted needed to be a versatile player capable of catching the ball as well as taking pitches. Edgar Bennett is one of the best pass-catching backs the Packers have ever had, catching 59, 78 and 61 passes in 1993, 1994 and 1995, respectively. He’d be the perfect back to have running safety routes and taking the occasional swing or outside pitch.

WR: Billy Howton – Sterling Sharpe was off the board, so to me the next-best choice was either Billy Howton or Boyd Dowler. I went with Howton, who played without great quarterbacking but still managed to put up numbers that should have qualified him for the Hall of Fame. Let’s face it, backyard football quarterbacking tends to be less-than-excellent, and Howton can make anyone look good.

OL: Frank Winters – Every Thanksgiving backyard football game needs a guy who can hold his own after eating a ton of food and drinking a ton of beer, so Frank Winters seemed like a natural choice for my OL selection.

Flex: Irv Comp – Finally, my secret weapon is Irv Comp, a two-way player who was a quarterback and DB. Comp racked up 10 INTs in a single year, and was a capable thrower of the football in an early NFL that didn’t see a lot of downfield passing. You need good two-way players in a backyard game, and Comp is exactly that. He’s also a guy who can be used on gadget plays. Majkowski can lateral the ball to him on gadget plays for Comp to throw the ball down the field himself.

You can’t beat my squad, folks. Admit it.

This week’s question comes from Ben Sailer, @bensailer on Twitter.

Who would win in a game between 11 Mason Crosby’s and 11 Corey Bojorquez’s? Two dudes playing every position on both sides of the ball.
Before I break down Crosby v Bojo, let’s watch a simulation courtesy of our friend Drew “Not The Expert”.

The kickers prevailed in the simulation, but that was between all the kickers and punters. Here, in our hypothetical, it’s 11 copies of one player.

At first glance, the Bojos have the advantage. Height, reach, age; this thing could be a blowout. However, let’s not forget the Packers best special teams tackler for the last decade may be Mason Crosby. Now, imagine 11 of those out there. Good luck getting any YAC or missed tackles on this team.

Plus, in terms of scoring potential, the Crosbys have the edge in terms of kicking (at least, you’d hope so). They could turn this into a slog and pull it out at the end, in classic Crosby fashion.

All in all, the young, more athletic Bojos should be about a 10 point favorite and I’ll take them to cover, but the Crosbys could definitely pull off the upset.